The Mission: Launch a Startup Business in Just 54 Hours

Do you ever wonder what it would be like to be an entrepreneur?

Well, at Startup Weekend you have an opportunity to find out.

I arrived early in the morning for Startup Weekend in Ogden to attend the grand opening ceremony for the building it would be held in. The building is called Weber State Downtown / Startup Ogden.

It's an amazing building that has been totally renovated from top to bottom, and it will hold a campus store featuring Apple products, among other things, on the main floor. But the building actually comes alive as a co-working facility. It is a place for individuals, or small companies to work in an open environment, at a very reasonable cost per month. Prices start at $50, and go up to $99. What a deal!

The space houses private as well as common desks, 24/7 access, board rooms, a training class with 36 brand new iMacs and more. I could do a post alone on this great resource in Ogden, but I will just advise you to go visit this building. And if you can't get there fast enough, you can learn more about Startup Ogden here.

You can also read this great write up by David Gosse: Kauffman Pics Ogden As Top 8 Entrepreneurial City In America

The entrepreneur community force is strong in this area (said in a Yoda voice in my head). The third floor filled up fast in preparation for the introduction of the evening, and the pitches themselves to begin.

Everyone in attendance was asked to pitch something, though not all did (it can feel intimidating). I finally grew the courage to pitch an idea (second to last person, mind you), but in the end I did not get enough votes to move on. Oh well.

1: Solve A Problem: Build A Business

We were encouraged to pitch brand new ideas. Something we just came up with at the event, or some idea we had been thinking about for a while. Only real rule was, it could not be something we had already worked on previously, or were in the middle of. They want you to start from scratch!

First, a word game: There was a fun word game we all played beforehand where we chose two random words on a white board, and we were asked make a business idea out of it. It was a great way to get started, and get the brain pumped up. (our words were "snow" and "moxie" uh, you don't want to know)

Second, the real pitches began: There were 47 people who pitched ideas. Each had one minute to sell their idea to the crowd. There were a lot of great ideas, but after all of the pitches the voting began, and only 12 ideas moved on to what I would call a "now go and build it round".

The pitch that won my heart came from Jimmy Jacobsen, co-founder of @Wedgies out of Las Vegas. Jimmy pitched doing a Kickstarter project. He had no idea what the project would be, all he knew was he did not want to do any coding. So, no apps in this group. I had never done a Kickstarter before, so the idea was quite intriguing to me.

2: Build A Team Of Amazing People: Strangers Turn Into Teammates

Hopefully your pitch rocked someones world, or a few people. It must have, right? Your idea made the top 12! At this point you tell the crowd what you are looking for, designers, marketing people, coders, administrators, app developers etc, and the team building process begins.

The best, and possibly coolest part here is, most of the people don't know each other. Sure you may have a few buddies in the building, but the majority of people have never worked together. So it's awesome to see the dynamics of the teams grow from night 1 to night 3 as the process unfolds.

The way to be successful here is not to just sit in a group and code things. Sure, you need to do that eventually, but you are pushed to go out and do some market research, and get product validation before you do one lick of code. Why build something no one will buy, but you? Find a problem, solve it, create it, then sell it! That's the American Dream!

OK, this is on a team by team basis, or person by person basis, but I saw it happening. Happened to me, especially since my body clock was already jacked up before I even got to the event.

Some people were pulling all nighters working on their project. Why? You only have 54 hours to go from conception to a final product pitch, so if you want to crush it, you gotta do what you gotta do. And sometimes that means little sleep!

As mentioned above, there is a wide variety of people who attend. You have other business owners, coders, and thought leaders. One really has to thank Alex Lawrence for putting together such a great event, and attracting some of the best and brightest talent both in the area, and some from out of state as well.

On my team alone I met some great folks whom I plan on keeping in contact with, and who knows, maybe work more with down the road. In fact, we are excited to see our Kickstarter launch. (more later)

I learned so much about ideas, concepts and execution that I had never thought about before. A few of the pitches were for bitcoin services, a face punching app for iPhone, a build your own story book, a simple podcast producer, a job referral platform, and of course our teams product, 3D printed customized dog tags called Twin Tags. 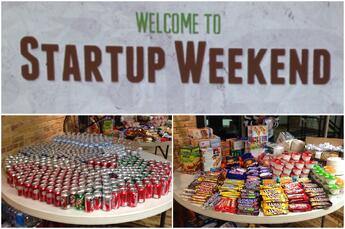 The organizers make this VERY affordable. $45 early bird or $99 if you are a slacker and wait to buy your ticket. But boy do you get pampered while you are there.

Breakfast, lunch and dinner is provided, not to mention snacks that would make a 7-11 jealous, and plenty of sodas, energy drinks and coffee to boot.

The swag and prizes are awesome. I scored a few shirts, books, hats and an awesome messenger bag from Ogden Made, while other prizes included a JamBox, iPads and more. Over $8000 in prizes!

Where else can you go do something like this for under $100? You can't!

Alex and his team did a fantastic job here. Kept the costs down, and the value was high. And it could not have been pulled off without awesome organizers and sponsors! So thanks to all!

I met with many people who gave me some great ideas. Not just about my business, but about other ideas as well.

My experience: I learned:

9. Shock and Awe: The Final Pitches For The Prize 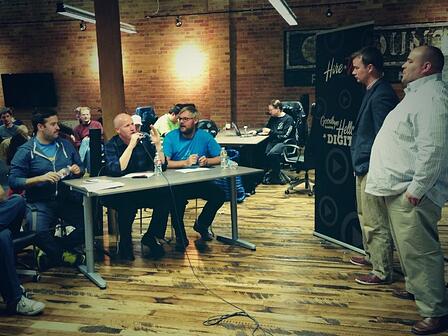 This is the superbowl moment of Startup Weekend folks!

12 teams have 5 minutes to present their startup business, and the judges have up to 3 minutes to ask follow-up questions. Once all of the pitches are complete, the judges go and choose the top 3, and then narrow that down to the final winner.

What made this awesome? 12 groups created 12 businesses in 54 hours. That's what!

It's strange, as you are there and in the middle of everything, you are kind of in your own world. You think you have the BEST pitch. Then during final presentations it's like "where did all these awesome ideas come from?" I mean, I was literally floored by some of these pitches.

To be able to implement and launch a working product in 54 hours is amazing. Our team did it, and so did the other 11!

So cool to see success from everyone.

This I loved. Not every idea you have, or launch, will be a success. But that is how you learn, how you get better at what you do. No matter what, do not be upset about failure, embrace it, celebrate it. It means you get to move on to another project, take what you have learned, and possibly make your next venture a success. Do it until you do it right! Most of all, have fun!

One of the judges, Andrew Hyde, who is the Founder of Startup Weekend, shared that he sees failure as an absolute success. And he has spent thousands of dollars taking friends to dinner over the years to celebrate the failure they just had. Kind of adds a new perspective, no?

11: The Winner Is Chosen: Story Twist 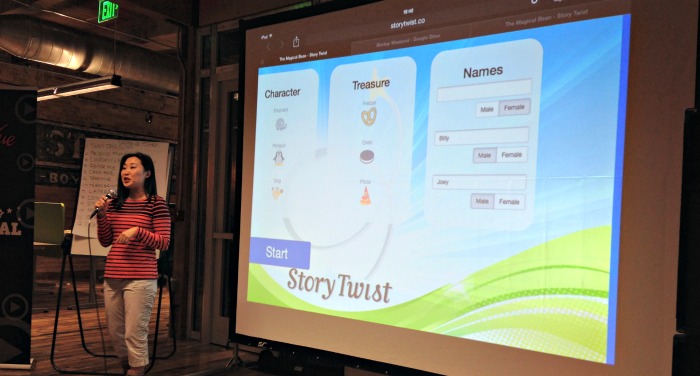 There were so many cool ideas this weekend, but the winner was a startup called Story Twist. It is an interactive, child immersive, children's book. You can choose your character and story line to create a true unique experience each time you read a story on your iPad.

Learning how they did the market research, got kids to play with an early version of the app, spoke with parents and teachers, and still get the product finished was amazing. The judges thought it was very creative, as did all of the folks in attendance.

12: Anyone Can Actually Launch a Business

From this night, many will continue with the business they started. I am sure the winner will!

The one thing I would like to know, from a global scale, is how many startups incubated at a Startup Weekend has gone on to be a success. According to the Startup Weekend website:

Utah holds 4 of these each year. Typically two in Ogden, one in the Provo area and one in Salt Lake City. I urge you to come to an event and experience it for yourself.

Reading this and not in Utah? Well, these events happen all over the place. In fact, here is a map of the events just in November around the globe. Visit http://startupweekend.org/ for more details.

My Pitch To You

Do you have an idea for a problem that you want to solve?

Chances are yes, and so do others. You can come to a startup weekend and pitch your idea to all in attendance, and maybe move on to the next big thing. Worst thing that may happen: you meet some awesome people, help build a business, stuff your face full of awesome food, have a few too many Diet Mtn. Dews and make some new friends. Not too bad of a deal, is it?

I can not recommend a Startup Weekend enough. If you have never been, I suggest strongly you attend one in your area. Heck I am almost addicted enough to travel to one in another state. Anyone want to carpool?

Our Teams Pitch: Twin Tags (I had to share)

We wanted to create a Dog Tag that is awesome for your dog, but also created a bond between you and your furry friend, a matching key chain. It is meant to be customizeable where you can add 3 lines of text, even a Twitter handle! (you know you all have Twitter handles for your dog!)

It is "Something for your Better Half"

Here is the video we created to tell the story of Twin Tags. Props tro Drew Tyler fo putting this together. 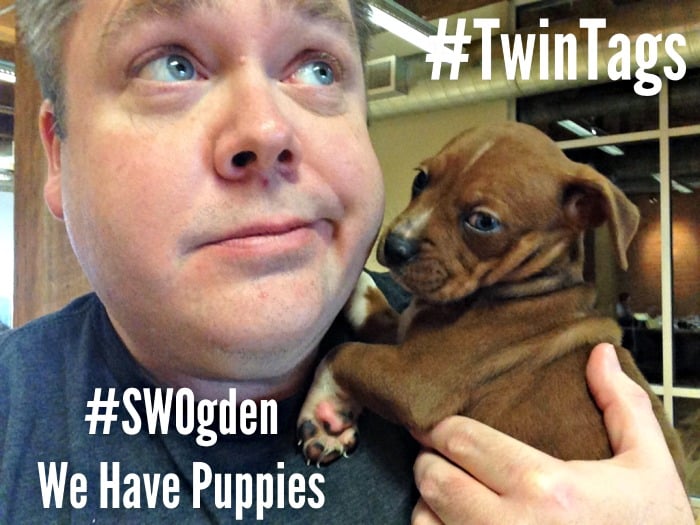 Pretty neat huh? From thought, to market research to sourcing, to building a prototype, to launching the Kickstarter. All in 54 hours. What a rush man, what a rush!

The Kickstarter we created is live now. Click here to learn more, and why not be a backer of the project?

Hope to see you at an upcoming Startup Weekend!