Was Inbound15 For Everyone? Yes and No. But Dammit If HubSpot Didn't Try!

So, last week I posted what I was looking forward to at this years Inbound conference in Boston. Let’s recap what happened based on my plan of attack and experiences. 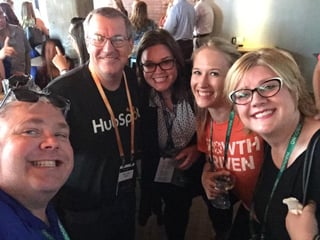 As a co-leader for the Salt Lake City HUG, it was great to attend a couple different events HubSpot put on for us. We had a fun meet up on Tuesday and a breakfast on Thursday that was kind of a best practice session with some Q&A for all the HUG leaders across the globe.

It really is awesome to be a part of this community of other HUG leaders, and to be able to work closely with HubSpot in putting on these events for our awesome attendees. Again, if you are in the SLC area, are a HubSpot user or not, and you want to learn some awesome Inbound techniques, join us at an upcoming SLCHUG event.

The Keynotes Were They… Too Human?

HubSpot embraced the fact that this was not a conference, especially a conference about marketing, but rather a movement that inspires us to be more human. Here is the introduction video that kicked off the event:

This is all fine and good, but don’t kid yourself into thinking that people did not attend this event to learn better sales and marketing techniques. Let's look at each presenter:

Unfortunately, I missed the first keynote with Brown, but did catch the rest. From what I heard, she did a great job. I look forward to the recording.

Seth was Seth, and was pretty dang awesome as always. The thing I love about him is his ability to deliver without using a lot of slides. In fact, he had NO SLIDES on this night, though did have a few fun props.

This keynote felt a bit out of place for me. I think he's cool, and his presentation was indeed funny, but I had a challenge relating to why he was keynoting. Yes, he published a book, and he has a great lens that he sees the world through, but I left saying to myself “WTF? I should have slept in”. Maybe I missed the point, and if I did, let me know in the comments below.

This was the keynote all the HubSpotters were waiting for. What would be announced as new features in the platform? How will HubSpot change the world this year? Below is the full keynote presentation for you to view if you like, but here are some highlights:

New Add-ons to the HubSpot product.

I am planning on writing more detailed posts of a few of these new features soon, but in the meantime, feel free to watch the keynote from Brian and Dharmesh below.

Of all, this was my biggest “huh?” of the keynotes. I had no idea what to expect, where she would go with this, and how it would tie in to what I do, but while the content of her talk was very inspirational and moving, it was just off topic for me at this conference. What she had to say about women rights around the world was fantastic, and heck, made me want to be a better person, but there was nothing for me in the “this is what I came to learn” department.

FINALLY a keynote that was on the money. While I am sure he was paid, and he could care less, the main hall he presented in was only 1/3rd full. He presented at the very end of the conference, as most people had already headed to the airport. He should have opened the show.

His presentation was all on sales, and how it used to be a “buyer beware” world. But not any more, it’s now a “Seller Beware” world. It’s now about how your customers are in control of the buying cycle,. I will write more on this later, including what he calls “The Pixar Pitch”.

That’s the recap of the keynotes. I was unable to attend any other general sessions or bold talks as I was in the partner tracks every day.

Partner Sessions and The Partner Keynote

Let me just say this, after over 16 years years doing internet marketing, and after using many software solutions, what HubSpot has done with the partner community is amazing. They really do have a way of making us feel as if we are a part of the HubSpot family.

The partner sessions were awesome. Here are a couple of takeaways that I'll write more about later:

Huge thanks to the parters that presented. It's so great to be a part of this Inbound community that is willing to help eachother grow.

Oh my god, she was so funny. I was worried that HubSpot may ask her to tone down her shtick, but nope. She was very much in her filthy element, dropping so many funny, gut laughing jokes. Catch her upcoming show on HBO in October, I think it will be pretty much the same routine.

Inbound was indeed awesome. There is so much to see, and only so much time to get to everything. Many of the general sessions had lines, and had to turn people away. While HS did a great job of having encore sessions for many of these, it was a bit of a strain for some.

The onvention center is freaking huge, and it has to be with 14K+ people in attendance. You need to plan on walking a lot and bring comfortable shoes.

My final tip: if you plan on going in 2016 (tickets on sale now), you must divide and conquer. If your company uses HubSpot, don’t just send someone in marketing. Send a few people, especially some folks in sales. Plan your event in advance, and have your team catch different sessions, don’t just hang with your homey’s. You do that at home every day of the year. Get out there, network, and come back home and share the knowledge.

For those of you like me, doing Inbound solo this year, just do your best to see what you want to see, and catch the replays of the other sessions after they post them online.

I could go on, but I will stop here. Watch for some more detailed posts of the items mentioned above soon

And yes, I did get my Burger at Boston Burger Company. I think I'm still full!

THIS is "The Kitchen Sink"! #nomnom Look how happy @davidmalmborg is at the @BostonBurgerCo! pic.twitter.com/qCGQwWssep

To all the HubSpot folks who planned and manned the event, thanks for making it a great experience. Everyone is so nice and helpful. It's so obvious that you love what you do!