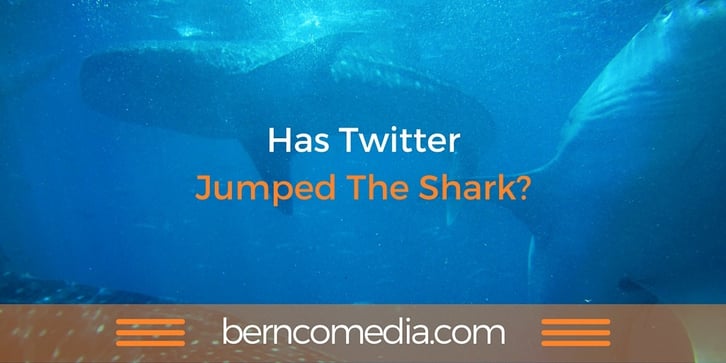 But the question is: The wrong direction for who?

Over the past few weeks, Twitter has released some updates to the platform, as well as announcements about the company leadership, and boy do these updates have some internet marketers in an uproar.

Over the last couple of days, I have been on multiple Blabs watching feeds of folks discussing these updates. My god, you would think the sky is falling. Some predict that this is the beginning of the end for the social media platform. I just have a different opinion, especially on the Tweet/Share button issue. Maybe we should call it "ShareGate"?

But, for those who are not in the know, let’s touch on each one of these real quick.

orsey is back as CEO of Twitter. After co-founding the Twitter platform, Jack eventually "left" and started the massively popular mobile payment company, Square in 2009.

After Dick Costello stepped down at Twitter, Jack was brought back to be interim CEO as they looked for a replacement, and it was recently announced that Dorsey would indeed remain as permanent CEO, while also maintaining his position with Square.

Personally, I am thrilled about this. It's my hope that he will put focus back on the user experience, and help propel the platform to new heights, and breath some much needed excitement back into Twitter. We will just have to wait and see.

Side note: Does this remind you of any other companies that ousted the founder, lost their way, and brought back said founder to re-boot the company? Steve Jobs and Apple come to mind. #JustSayin

Hang on just a "Moment"

So, in an effort to spur user experience, Twitter launched a new feature called Moments. This has many of the marketing people screaming bloody murder in the way of:

In a Periscope Tuesday, Twitter was online doing a town hall of sorts, and talking about the new moments feature. They said that they are working on the algorithm to serve better content over time, expand the categories, and to eventually be able to have it so people can create their own moments.

I am sorry dear marketer, not all features that get rolled out are for us to extort, umm, I mean, create a new income stream opportunity our business, umm, I mean help our clients make money.

Some features are just rolled out to

Will moments be the golden goose that actually does all of the above? Maybe not. Twitter has experimented with other services in the past, like Music. Remember that disaster? But, if they don’t continue to innovate and add value in some way, they could very well indeed fade away.

The Moments feature is just OK for me. It’s not life changing by any means. It does however open me up to other content, or other people that I may want to interact with. So, that's cool I guess. I mean, I may have never seen this super cute Corgi feed. Look at these pics, and meet me back at the end.

OK, let's get back to the point.

Look, I am, you are,  just one of millions of types of users on Twitter, and Twitter has always been whatever you want it to be, for however you want to use it. In other words, dear marketer, Twitter was not just made for you. We are just allowed to play there.

Side note: Anything that Twitter can do to bring more people to the platform, and keep them there, is 100% fine by me! As a marketer, that means more data and more opportunity to engage with a targeted audience.

Bye-Bye Share Counts - It Was a Love/Hate Relationship Anyway, For Me

Recently, Twitter announced updates to the social share button that they have offered the last 5 or so years. You know, the button that tells you how many times this post has been shared on Twitter. (How many am I up to now? Meh, I don't care. I really don't)

Due to a technology challenge (so they say) they are removing the share count feature in November, 2015.

Blab has blown up with people saying that this is the dumbest thing Twitter has done.

Oh my god, dear marketer, are you sheeple? Are the people whom you market to sheeple? Do you assume only those future consumers of your content will only read because 1000 people shared a particular post vs 10 shares on a post someone else wrote? I think the reader is smarter than that, and I treat them as such.

I got into a bit of a debate on a particular Blab today, hence my rant post here, and not many folks agreed with me. But, think of this. Remember when Google pulled keyword data from Google analytics? Everyone FREAKED OUT, well everyone doing SEO and content marketing did at least. The reader, the consumer, your prospect did not freak out... they had no idea we lost our keyword data! But, people in the online marketing world predicted SEO is dead. But has it died? Nope. Still thriving.

So, does Twitter have one foot in the grave now that they will not be allowing anyone to see how many shares your blog post has?

Look, in the inbound and content marketing world, I am after building content that will resonate with my target audience, and where they are at in their buyers journey. I am in it to get my content to the top of Google, even though I don't have my handy dandy keyword data. IF I get someone to my website via Google, they are 1000% more valuable to me than a share. Hell, even more valuable to me than a share that was clicked.

Share counts, in my opinion, are a vanity metric, and always have been. Even according to Moz on a recent Whiteboard Friday, there is no direct correlation between amount of shares, and visibility in the search engine.

Is it cool to get shares on of your content? Sure it is. It’s awesome because you have the ability to get in front of someone else audience. And sure, maybe they will click through, but those clicks are usually quick bounces on your site anyway.

This update that Twitter is rolling out will not stop the sharing of great content, we just don't have a little box on our site where we will be able to go to feel better about ourselves because someone likes us, we are pretty, we are good enough, and doggone it, people like us.

I track referral traffic from Twitter, as well as leads, conversions, and sales. At the end of the day, having this share count not available for visitors to see won’t change a thing. And even if it does, like the keyword data we lost in Google Analytics, we move on. Maybe this levels the playing field for those with less share counts. Maybe, we become better marketers, and find better ways to track ROI, and prove our value. In fact, I know of quite a few companies, in certain verticals, that have no share data on particular content, BUT the traffic is tracked, and tied to hundreds, thousands and even millions of dollars in revenue. THAT is the game. folks!

Dear marketer, rather than boohoo about this vanity metric going away, and messing with how you report this lazy KPI to a client (look how many shares, Sally), focus on creating a great social community. You will still get the shares, you will still get the traffic, you just have to dig a little deeper to figure out how and what to report on.

There are so many other things that are actually wrong with Twitter, how it is used, and how, in my opinion, marketers ruined it. These announcements, including the share count "scandal", is the least of the problems for me as a marketer, and in my opinion have been blown completely out or proportion..

That’s the end of this mini-rant.